skip to main | skip to sidebar

As some of you know, I just had my tonsils out. Lincoln was born via c-section six months earlier. People told me that getting your tonsils out was worse than having a baby so I have decided to compare the two.

Recovery-When I woke up from getting my tonsils out, I had a young child on either side of me (it made me sad.) When I came out of the operation room after the c-section, they put Lincoln in the NICU (this made me sad).

First Time Out of Hospital Bed-Less than two hours after I had my tonsils out, I had walked to the car. It did not hurt to walk but I had developed charley horse from having my legs strapped to the table. Twelve hours after having a c-section at 4 a.m. in the morning, I had a nurse bribing me to get out of bed. She told me that she would take me to NICU if I would just get up and take one step to the wheelchair. For anyone who has had a c-section, you know how much energy and will power this takes.

Phone Calls-It took me 12 days before I could talk on the phone after getting my tonsils out. It took me two hours before I called my mom after having a c-section (couldn't use our cell phone in the recovery room.)

Driving-I could drive within 24 hours of getting my tonsils out. I couldn't drive for 2 weeks after having a c-section.

Energy-It was impossible to get energy after having my tonsils out due to lack of nutrition. After having a c-section it was hard to get energy because Lincoln kept waking up every three hours.

Sneezing-Both operations are bad for sneezing. Tears come to your eyes.

Overall recovery-It took two weeks for me to get back with life. After having Lincoln it took me almost two months.

Avalee tries to convince Lincoln he is still hungry. 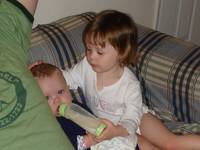 Avalee throws a pillow at Aunt Rose-Ellen and Uncle Roland and knocks them to the floor. 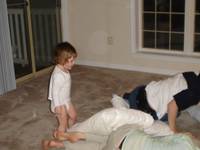 Avalee's morning conversation with Lincoln. "Hi, Lincoln. You awake?" Somedays she tries to convince him to get his clothes on so we can go bye-bye in the car seat. 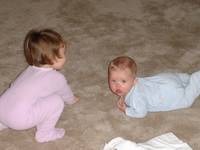 Lincoln hanging out with Daddy. Just our luck he spit-up right before I took the picture. Will this boy ever out grow this stage? 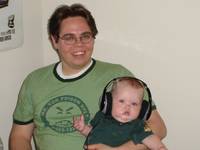 Avalee was running towards her Grandma Wood and hit the bricks. In a matter of two minutes, she had a bump the size of a circus peanut on her head. We took her to the emergency room and they told us to wake her up every two hours during the night and make sure she responded to us. The first time Nathan woke her up. He picked her up and she hit him. Nathan laid her back down. The second time I woke her up. She said, "Hurt, fall down." She went back to sleep. This is a picture of the bruise two days after it happened. It has been almost three weeks and the bruise is barely noticeable. 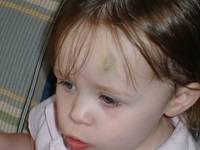 Peek-a-boo! I see you! Avalee played peek-a-boo with Lincoln and they both giggled. Should have had the camcorder not the camera. 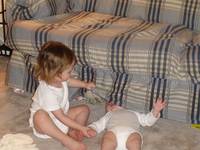 Lincoln no longer allows the blanket to be underneath him to catch the spit-up. He rolls all over the room and drags it with him. 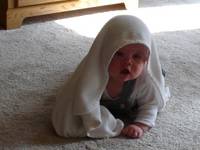 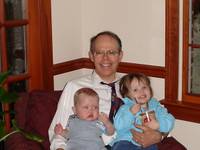 Lincoln loves to sit in his walker. He does get quite mad when the walls won't move for him. 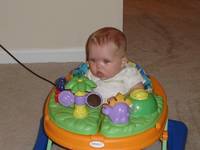 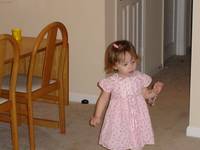